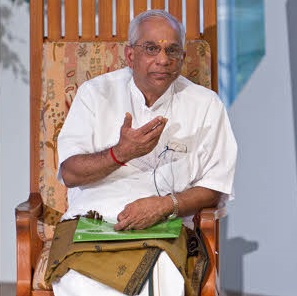 Swami Dayananda Saraswati (15 August 1930 – 23 September 2015) was an internationally known Hindu saint, a great visionary, an eminent and traditional teacher of Vedanta (the timeless  religious, spiritual and core philosophy from India), a brilliant thinker, writer and an exemplary contributor to the enrichment of humanity. He attained mahā-samādhi (cessation of bodily existence) on September 23, 2015 in Rishikesh, India. Swami Dayananda’s contributions in the spheres of Vedantic teaching, service to humanity, global spiritual harmony, rural education, preservation of indigenous social and religious cultures and national and religious unification in India are unparalleled in terms of the benefits and positive impacts to the spiritual and social lives of millions of people around the world. He was unequivocally a venerable teacher, exemplifier of contemporary Hinduism and a visionary to follow and emulate.

Swami Dayananda exhibited unbounded love for the humankind and devoted his entire life for the universal emancipation and spiritual enrichment. His activities in the domain of interfaith dialogues with world religious leaders stand as testimonies to his quest for raising awareness of mutual respect and religious harmony. He had an unassailable conviction that indigenous cultures and traditions which are integral part of people and societies should be preserved and nurtured. He was fearless in advocating that the freedom to practice one’s religion is not negotiable. He was indefatigable in working for the protection of that freedom.

Swami Dayananda’s life and work can be broadly classified in three areas – as a quintessential teacher, an exemplary contributor and an initiator of global spiritual harmony. As a teacher of  Vedanta, he established four traditional teaching centers and many others across the globe through his students with a primary focus on teaching Vedanta and Sanskrit and related disciplines. These traditional teaching centers carry the banner ‘Arsha Vidya’ i.e. Knowledge of the Rishis (Ancient Sages of India) and the word ‘Arsha’ has also been used by many of Swami Dayananda’s students in naming their facilities to mark the lineage. In order to teach the ancient wisdom of the rishis in a structured manner, which was heretofore taught on a one-to-one basis, Swami  Dayananda designed a three-year curriculum. He along with his students taught several of these three-year programs and many of his students from these programs are now teaching all over India and abroad, serving as the torch bearers of the ancient Vedic wisdom.

The Bhagavad Gita Home Study (BGHS) is a magnum opus of Swami Dayananda. Based on actual classroom teaching of the Bhagavad Gita to students of a three-year program, the BGHS is an innovative and efficacious plan to allow the public to imbibe the teaching of Bhagavad Gita. Because of its wide appeal, the BGHS is translated into several Indian languages such as Tamil, Gujarati, Telugu, Kannada and Hindi as well as other languages such as Japanese and Spanish. Besides the BGHS, Swami Dayananda’s teachings, lectures and writings have been published in more than 60 titles in English. A popular book that has been translated to both Spanish and French is “The Value of Values.” It is particularly popular among youth as it discusses the commonly sensed human values, an appreciation of which is the most important ingredient for harmony among religions, nations and cultures.

Swami Dayananda’s relentless focus to the service of humankind and the betterment of the neglected people from the lower strata of the society resulted in the creation of the All India Movement (AIM) for Seva in the year 2000. As an independent public charitable trust committed to care for people who need help, it reaches out to children from the underprivileged sections of the Indian society by providing them access to good education through an innovative model of free student homes situated near public and private schools. The student homes provide the children a clean living environment, nutritious food, uniforms, schooling needs, value based education, extra-curricular activities and more. The objective is to make a difference in the lives of children in rural areas throughout India by giving them an opportunity to be educated, to grow with self-esteem, to pursue a dream and contribute to their family, society and country. AIM for Seva has already touched the lives of thousands of students and their families and caused a life-changing transformation in rural India. Swami Dayananda worked tirelessly over several decades to promote multiple inter-religious dialogues and was an author and contributor to many Joint Declarations, with Jewish and Buddhist leaders for example. In his obituary on Swami Dayananda, Alon Goshen-Gottstein described Swamiji as a pioneer of Hindu-Jewish relations (Huffington Post, Sept 25, 2015). Undoubtedly Swami Dayananda’s commitment to religious harmony made him a revered spiritual leader across a wide spectrum of traditions around the world. He advocated that, “religious harmony is closely dependent on the freedom each religion grants to the other,” and emphasized that important message with an extraordinary clarity.

Swami Dayananda was a true entrepreneur of the spirit.He excelled as a superior teacher, spiritual visionary, servant of humanity and a tireless contributor in enriching the spiritual aspects of the contemporaneous society. His far-reaching and transformational work had yielded salutary benefits to millions across countries and continents. He will continue to live in the hearts and minds of the countless people who have been inspired by his teachings.

One of the teaching centers founded by Swami Dayananda is the Arsha Vidya Gurukulam (AVG) in Saylorsburg, Pennsylvania. It has been serving the community for the past three decades by imparting the eternal Vedic wisdom in the traditional manner. Under the inspiring guidance of Swami Dayananda, AVG has been the ‘home-outside-the-home,’ for a large number of families all over the US. Located on 50 acres in a serene setting in the Pocono Mountains, the Gurukulam offers short- and long-term programs of study for guest and resident students of all ages. The campus is adorned by a beautiful temple dedicated to Lord Dakshinamurti, considered the first teacher of Vedic knowledge. Apart from Vedanta, classes on Sanskrit, Vedic chanting, Vedic astrology, Ayurveda, meditation and Yoga are also offered. There are ongoing meditation and Bhagavad Gita classes and Vedic Heritage program for children and youth on 1st and 3rd weekends. These classes are open to all. In Swami Dayananda’s words, “AVG is not an organization, nor is it merely a facility. It has a certain atmosphere, a unique personality or a soul that makes it a home. All of you can feel that this is your place, it is your home. Some may live outside, others may live inside, but for all of us it is home.”

True to Swamiji’s words AVG is becoming a spiritual home for more and more people and as a result the facilities such as the lecture hall, dining and kitchen areas have become inadequate to fulfill the growing need. Hence, with the blessings of Pujya Swami Dayananda Saraswati and the consent of the Board of Directors, it was decided to construct a new facility of 21,000 square feet that can accommodate 400 people comfortably at a given time. Swamiji envisioned that the new facility will take care of the future growth of the Gurukulam. The construction work for the new facility has already commenced and is expected to be completed by the summer of 2017. The total cost of the project is estimated to be $7 M. Already $2 M has been pledged by a sponsor and another donor has come forward with an offer of $2.5 M, with the condition that the amount be matched by the patrons of AVG. This is very doable if 100 donors come forward with a donation of $25,000 each. As recognition of their generosity, the names of the donors will be placed on a plaque inside the new complex. This is a great opportunity and a privilege to extend the gift of the new complex in gratitude and loving memory of the great venerable saint, Pujya Swami Dayananda Saraswati.