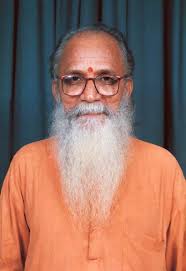 Pujya Swamiji’s name itself stands for his life and teachings; in a nutshell – Vedanta. He was an embodiment of humility, compassion and joy. Pujya Swamiji is undoubtedly one of the greatest teachers of Vedanta in modern times. A teacher of teachers, Pujya Swamiji has trained more than 200 disciples who are sannyāsīs  and highly respected as scholars and teachers in this tradition. In addition to the teaching, Pujya Swamiji initiated and supported various philanthropic efforts. The greatest contribution of Pujya Swamiji has been the creation of Hindu Dharma Acharya Sabha, which has emerged as the legitimate voice of Hindus at the global level.

As far back as 1893, Swami Vivekananda unfurled the banner of Vedanta in the West, and also made yoga familiar to the Westerners through his renowned treatise on ‘Raja Yoga’. After the great Swami, following in his footsteps, his Vedanta Centers have been doing a great work in disseminating the Vedic wisdom in the West, for many decades. Following the trail blazed by Swami Vivekananda many more personages and institutions have also been doing good work in this direction, and the contributions of Pujya Swami Dayananda Saraswati, in this regard, are laudable. It is worth mentioning that for decades, in India and around the world, Pujya Swamiji has been doing tremendous work, tirelessly disseminating the Vedic Knowledge, through his well established institutions in India and the U.S. He has also taken keen interest in providing yoga training to the aspirants through qualified yoga teachers in his Gurukulam at Saylorsburg, Pennsylvania. In view of his total dedication to the dissemination of Vedic lore,  besides the provision for study and practice of yoga – both of which were very dear to Swami Vivekananda, and in grateful acknowledgment of Pujya Swamiji’s greatest contributions to the cause of Hindu Dharma, the sixth edition (2013) of my book on Swami Vivekananda was dedicated to Pujya Swami Dayananda Saraswati. I must say here that literally it was Swami Vivekananda who brought me in touch with Pujya Swamiji, inasmuch as we together participated in Washington, in a program (1993) celebrating the centenary of Swami Vivekananda’s appearance at the Chicago Parliament of Religions in 1893. While Pujya Swamiji spoke eloquently on the occasion, I had the rare privilege of paying my reverential Homage to Swami Vivekananda.

I feel greatly elated when I visualize in my mind how overjoyed Swami Vivekananda would have been if he were to visit Arsha Vidya Gurukulam at Saylorsburg, Pennsylvania, to see the great work done there for the past 29 years, in the service of disseminating vedic knowledge in particular, and the Hindu Dharma and the Samaj, in general! Let the lines from Pujya Swamiji’s ‘Benediction’ to my book speak: “Swami Vivekananda is looked upon by an informed Indian as a person who enshrined in himself all that is true and noble of the spiritual heritage of Bharat. His vision to make everyone see the beauty of oneness, love and harmony, backed by his tireless efforts to actualize it, is getting unfolded all over the world not only through the Mission and Order he founded but also through various other individuals and institutions who owe to Swamiji’s vision for their inspiration…” – significant lines indeed revealing the source of inspiration behind the great work done by Pujya Swamiji and the AVG! Today, although Pujya Swamiji is no more amidst us in flesh and blood, he continues to live in the form of his immortal, lofty teachings, and the legacy of his discipleteachers, and through the various institutions established by him. The teaching is not separate from the teacher. ‘All that is here is Īśvara’ is the main teaching of Pujya Swamij.’ The real homage that we can therefore offer to a mahatma is to assimilate, implicitly abide by and live up to his teachings, in our thoughts, words and deeds, by being a shining example of the same, and be blessed thereby. That is the best way to make him immensely pleased and happy. And that is the task before us, to live up to the legacy that Pujya Swamiji bequeathed to us.