Swamini Brahmaprakasananda Saraswati was born in Tamilnadu at Rasipuram, Distt. Salem, on October 5, 1951. She moved to Mumbai at the age of six and continued her education in Mumbai. In her teens, she came into contact with Pujya Sri Swami Dayananda Saraswati and became his disciple since then.

She entered the medical profession by gaining the degree of MBBS from the Mumbai University from Lokmanya Tilak Municipal Medical College. From then on, she continued to study further and gained the Post-Graduate degree of M.D. in Obstetrics & Gynaecology in 1979.

All along, she was a disciple of Pujya Sri Swami Dayananda Saraswati and at his behest, practiced in a village Dahanu, an Adivasi area in Thane district, 120 km from Mumbai, as a gynaecologist. In Dahanu, she worked in a Brethren Mission Hospital, initially as a gynaecologist and later on as a Superintendent. Later, from 1984 till 1990, she ran a 20 bedded multispecialty private nursing home up to 1990. All along, she kept up the study of Vedanta from Pujya Swamiji through the audio recordings.

At the behest of Pujya Swamiji, with his blessings, she could find a teacher in Dahanu who could teach her the Paninian system of grammar and other texts in Sanskrit. She pursued the study of Paniniya Vykarana and other texts for nearly 12 years from Shri. Bhandari, who was a scholar in Sanskrit.

When Pujya Swamiji started the Arsha Vidya Gurukulam and a long term course in October 1990 in Anaikatti, Coimbatore, she joined as a student of that course. She had the privilege of teaching Sanskrit in her own course. After graduating from that course in 1994, she continued to teach Vedanta and Sanskrit and administer the next course at Arsha Vidya Gurukulam, Anaikatti under the guidance of Pujya Swamiji and Acharya Swami Siddhabodhananda.

She was awarded the title of Mahamahopadhyaya by Kavikulguru Kalidas Sanskrit University, Ramtek. 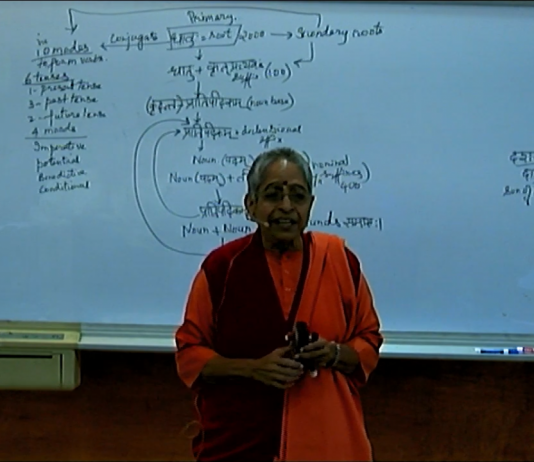