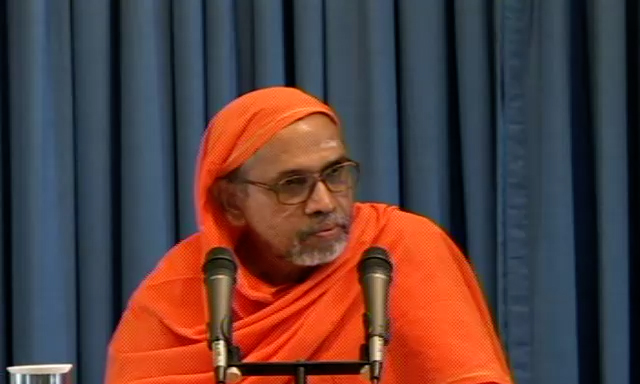 In the Vedic culture, worshiping of Īśvara – Īśvaropāsana – is very characteristic and unique, and probably slightly different from what we come across today in the Hindu society. Here, Īśvara is worshiped in a form, which is readily available for our perception as part of the Nature before us. For example, Īśvara is worshiped as the Fire. The Ṛg Veda, the foremost of the Vedas, starts with the invocation

I praise the glory of Agni, who is the foremost as a benefactor.

Here Agni is Īśvara. Aurobindo explained the word Agni as the Divine Will and Wisdom. In the Vedic culture, fire is universally taken as the symbol of Īśvara. We relate to, or worship Īśvara in the form of fire. Another such altar described in the Vedas is the Sun. Vedic people regularly practice a mode of worship called Sandhyā vandana. It is the most well-known mode of worship in the Vedic culture even today.

Vandana is upāsana or worship. Sandhyā means the junction between the night and day when the Sun rises, or between day and night when the Sun sets. Vaidikas worship Īśvara at that time in the form of the Sun. They offer water (arghya) thrice to the rising and setting Sun, and then meditate upon Īśvara as the presiding deity of the solar orb by reciting the famous Gāyatri mantra.

I am the meter Gāyatrī among the meters.

The meter Gāyatrī has three lines of eight syllables each. Thus, it has twenty four syllables in all. Every mantra describes the glory of a devatā. Devatā means a particular manifestation of That Para Brahman (or Īśvara). Thus, the recitation of a given mantra amounts to the worship of Īśvara in the manifestation of that particular devatā. The devatā of the Gāyatrī mantra is the Sun.

We meditate upon that supreme light (Awareness) of the Lord, who creates and nourishes this universe. That Lord alone illuminates and inspires our thoughts.

Awareness. Bhargaḥ means that caitanya, Awareness. It is the origin of the kriyā śakti (energy, potential or expressed in the form of action) and jñāna śakti (the power of knowledge). This entire universe is nothing but a combination of kriyā śakti and jñāna śakti. All the matter comes under the category of kriyā śakti alone. Bhargaḥ, the Awareness is the origin of these two. Bhargaḥ, the caitanya which is Para Brahman is called tat, tat bhargaḥ. Tat is sarvanāma, a pronoun. The word sarvanāma means the name of everything. Everything is a manifestation of Para Brahman. Hence, the name of everything also represents the origin of everything. Worship of the Para Brahman in a given altar is called saguṇa (sākāra) upāsana. Saguṇa means having attributes; sākāra means having a particular form. There is a problem in worshipping the Para Brahman in Its attribute less formless nature. Bhagavān says in the Gītā (12-5):

For a limited being (jīva) rooted to the body, identified with the body, appreciation of formless attributeless Para Brahman straightaway is a very hard task, for the mind is accustomed to dwell upon names, attributes and forms. Therefore, Bhagavān advises that the devotees may start with the worship or meditation of the saguṇa. Saguṇa meditation is also called as Apara Brahma upāsana, in contrast to Para Brahma jñāna (knowledge of Para Brahman). So, to make meditation easy by taking to an altar of worship, saguṇa sākāra has to be superimposed on the attributeless Para Brahman. This idea is summarized in the statement:

O Lord, You do not have fixed attributes, or form. You do not really wield any weapons. There is no location for you. Yet, for the benefit of meditation upon You by the devotees, a particular form is superimposed on the attributeless Brahman.

Meditation on the Saguṇa helps the seeker to purify the mind and thereby gain a higher level of understanding of the Para Brahman.

In the Gāyatrī mantra, the Sun god is introduced as Savitur devasya. This word Savitā appears in the Āditya Hṛdayam also. Īśvara is called Savitā because he creates, protects and sustains the entire life in this universe.  For this reason, the Gāyatrī mantra is also called Sāvitrī. With reference to meter it is Gāyatrī, and with reference to devatā it is Sāvitrī. There is one more point of interest in Gāyatrī in the context of Śrīmad rāmāyaṇam. If we divide this great epic of 24,000 verses into 24 units of 1000 verses each, then each unit starts with a successive syllable of Gāyatrī. This incorporation of Gāyatrī in the verses of Śrīmadrāmāyaṇam makes the latter particularly auspicious. Quite often people ask me a question: Swamiji, can women recite Gāyatrī mantra? I quote a verse from Yama Smṛti as the answer to that question.

In the earlier times, the investiture with the sacred thread, teaching of Vedas and recitation of the Gāyatrī was allowed (desired) for the women.

Sītadevī was described by Vāmīki as performing the sandhyā meditation in the aśoka forest, where she was held captive by Rāvaṇa. One should relate to Īśvara every morning at the time of sunrise, irrespective of the situation in which one finds oneself, whether one is in prosperity or in adversity. This daily worship called sandhyā vandana should not be dispensed with.

The Cosmic Person (Īśvara), who brought out this universe out of himself, is often called in the Vedic literature by the name Hiraṇyagarbha from the standpoint of the Universal Power and Omniscience. In the Puranic literature, Īśvara is referred to as Viṣṇu (one who pervades all) or as Śiva (the auspicious). That Hiraṇyagarbha is worshipped in the altar of the Sun, because, in this Solar system where we live, it is the Sun that is the source of all energy, all activities and all life. That Īśvara, who is manifest in the form of the Sun before us, is also present in us in the form of Ātman, the

Awareness, thereby illuminating our thoughts, and making all varieties of knowing possible. If that Awareness were not to manifest, then there would have been no faculty of thinking. The power of thinking (dhīśakti) is the basis of human existence. A human being is nothing but his ideas and understanding (buddhi). The difference between a person in coma and a normal person is the power of thinking alone. In fact, all the metabolic processes such as regulation of body temperature, heartbeat etc go on even for a comatose person. The only difference is that his intellect is not functioning. That is also the reason why he is not moving or doing anything. We think that the buddhi is present inside the body. But that is wrong. The body exists in the buddhi, and that buddhi exists in Ātman, the Awareness, which is that Para Brahman. That Awareness (caitanya) manifesting in this body-mind sense complex in the form of consciousness, inspiring the buddhivṛtti-s, is also present before us in the form of the solar orb, the abode of Hiraṇyagarbha. That is the meaning of Gāyatrī mantra in a nutshell.

In Rudrādhyāya (1-7), Lord Śiva is presented as Nīlakaṇṭha (the one with a blue neck):

Lord Śiva is blue in the neck, but red in the rest of the body. That Lord is rising before us as the Sun.

There is a popular story in the purāṇas. When the ocean of milk was churned by the gods and the demons, what initially arose was the most virulent poison. On their request, Lord Śiva devoured it and held it in his throat without gulping it, imparting blue color to the neck. But, we may not cite a Puranic story to explain a Vedic usage, since it is the purāṇa that follows the Veda, and not the other way round. The word Nīlagrīva can be understood differently from the point of view of the Cosmic Person. The words nīla and lohita respectively refer to the blue and red colors of the sky. In fact, Lord Śiva is the Cosmic Person

Hiraṇyagarbha, and the Sun is the Adhibhuta (the gross or the physical) or Adhidaiva (pertaining to the presiding deity) symbol of the Lord. This mantra is describing the rising Sun (Asau yovasarpati). At the time of sunrise and also sunset, the horizon is all red with patches of blue. That horizon is visualized as the neck of the Cosmic Person.

It is normally understood that Īśvara is known only to a select few called ṛṣis. Common people are not supposed to have the sākṣātkāra (direct visualization) of Īśvara. But then the Veda has the opposite to say:

Even the cowherds and the women folk carrying water pitchers see this Lord in the form of the Sun. Indeed, all living beings see Him. He is also seen by us. May He protect us.

The cowherds and the women carrying water pitchers on their heads represent the illiterate masses of the countryside. Even they see Īśvara. Not only that; every bird, creature, and animal knows the arrival of the viśvabandhu, the protector of the entire universe.  When the Sun is rising in the east, it is an event recognized by almost every life form, excepting of course, a few people who choose to sleep at that time also! By praying to Īśvara in the altar of the rising Sun, the devotee will gain robust health both physically and mentally. 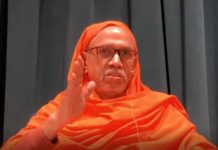 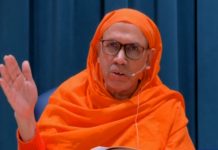 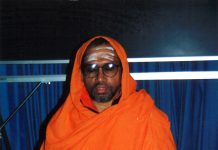 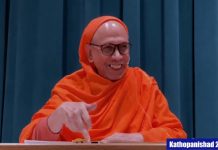