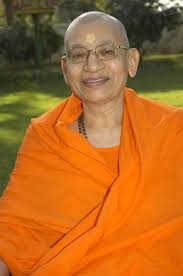 “Brahman is that very (consciousness) which one does not know with the mind and by which (consciousness), they say, the mind is known” – (Thus) you understand. This (deity), which (people) meditate upon, is not (brahman).

To know a clock, which is in front of me, I require my eyes. The clock does not have the capacity to reveal itself unless my eyes illumine it. The furniture in a dark room does not have the capacity to reveal itself, unless it is illumined by a lamp. It is inert and needs another source to illumine it. So also, the objects of the world are inert and require the organs of perception to illumine them. The organs of perception require the light of the mind, which, in turn, requires the light of Consciousness to illumine them. In Vedantic terminology, all of these are inert, jada; that is, they require the light of Consciousness for their revelation.

Yaṁ neti neti vacanirnigamā avocuḥ. Nigamā is the Vedas or Upanishads. Avocuḥ means describes. The Upanishads describe the Self in terms of neti neti or not this, not this. The Upanishads describe the Self through the process of negation. That is, what you visualize is not the Self. The one who objectifies is the Self, but not the object that is objectified. All the attributes and qualifications are negated. The self or Consciousness is unqualified. It is free of all attributes and limitations. The ultimate truth or the ultimate reality, which we may call brahman, Self, ātmā, paramātmā, Isvara, Rāma or Krishna, is devoid of all attributes and limitations. An attribute automatically means a limitation; it excludes some other attribute. For example, when we say a particular person is great, the greatness, which is an attribute, implies that he is not little. Or, when we say that a particular flower is red, we mean that it is not green or yellow; it limits the flower to redness and excludes everything else. Any entity that posses an attribute or qualification is limited because it is confined only to that and can be nothing else. But the ultimate truth is that which cannot exclude anything.

Truth is that which includes everything. If God is in heaven, it means that He is not on the earth. Different religious sects describe their gods as being in different heavens. Some say that their god is in Vaikunta, while others say that their god is in a place beyond Vaikunta. Almost everyone, except the Vedāntins, talks about heavens. In India, most people are Dvaitins. The followers of Lord Nārāyana call their heavens Vaikunta; the followers of Lord Siva call it Kailāsa, and the followers of Lord Krishna call it Gokula. That is where their god is and you will go there if you are devoted to that particular god. But the point is that if Lord Krishna is confined to Gokula, he is not here on this earth. However wonderful and divine that god is, as long as he is confined to a place, so long is he not in any other place. That is why we say that nothing can be outside the purview of God; otherwise, God becomes limited. In order for God or Truth to be limitless, It must be all-inclusive. There can be nothing that can be apart from the Truth or God. Even hell cannot be apart from God; neither can evil be independent of It. Therefore, we say that God is apart from both dharma and adharma, virtue and vice. If God is only good, He is not bad; that means there is something that is excluded from God and therefore, God becomes limited. We say God is beyond both good and bad. He includes both and He is, yet, beyond both, just as the actor plays both the beggar as well as the king, while he is himself neither beggar nor king. Therefore, the actor pervades and also transcends both roles. Therefore, the Truth is both immanent as well as transcendent. In these verses, the teacher describes the Truth, which transcends all limitations, attributes, and conditions.

The implied meaning of the words of the scriptures, not their literal meaning describe the Self

A word can only describe that which is limited. Whatever word you use, ātmā or brahman, it really cannot describe brahman because every word describes a certain concept. A word is a sound symbol for describing a concept. When we say ‘clock’, the clock is a concept. Similarly, the word ‘pot’ is a concept. The concept is the form and the word is the name; they are the name and form. All words describe concepts, which are limited. Thus, the words ‘God’, ‘ātmā’, or ‘brahman’ cannot really describe the Self.

What is ātmā? You could say that ātmā is the ‘I’. However, describing it as ‘I’ is also not sufficient because ‘I’ excludes ‘you’. When we say brahman is great, we exclude that which is small. The description of one concept always excludes another concept. Thus, the word ‘God’ cannot describe what we want to describe. Nigamā avocuḥ, the scriptures talk about it. The scriptures say that God is beyond words; yet, the scriptures consist of only words. The Upanishads say that God or brahman is beyond words, and this statement itself is said in words. If words can never describe the Truth or brahman, does it mean that we will never know the Truth? Vedāntins say that the Truth or brahman cannot be the vācyārtha, the literal meaning conveyed by words, but are the lakṣyārtha, the implied meaning of the words.

The words are like the pole used in a pole vault. The pole is used to vault over a high bar, as high as eight or nine feet. One has to necessarily let go of the pole to cross the bar. If one holds on to the pole, one will not be able to cross the bar; on the other hand, if one does not use the pole, one will not be able to rise as high as one needs to. The pole itself is used to transcend the pole. Similarly, in describing brahman words are used to transcend words. If you use the words properly, they will enable you to transcend the words. Therefore, the teachers communicate with us through the words and we have to understand their lakñyārtha, not their vācyārtha.

You can know the movement of a train, only when you are standing on a platform that does not move. If you are in a moving train adjacent to another train, which is also moving at the same speed, you will not see the movement of your train. To notice a movement, you have to be free of the movement. To notice an agitation, you should be free from that agitation. To notice a change, you have to be apart from that change. To know an attribute, you have to be free of that attribute. Therefore, who is the Self? Who is the ‘I’? What is Consciousness? It is devoid of all limitations, attributes, qualifications, and conditions. It is the one which illumines all the attributes, conditions, and qualifications.

Each one of these qualifications is negated because each of these ideas arises when we identify with one or the other aspect of our personalities. It is the body or mind, which performs various actions in identification with the ‘I am’. When the body is not acting, I say I am not acting. But the Self is devoid of the idea of acting; acting or not acting belongs only to the non-Self, matter. Not doing anything is also an attribute of the body and the mind. The Self, ‘I’, is beyond the idea of doing and not doing, right and wrong, good and evil, dharma and adharma. The Self, which is beyond all pairs of opposites, is attribute-less. It is self-shining; therefore, you don’t need the sense organs or mind to illumine the Self. It is beyond all limitations, self-existing, self-shining, and because of which everything is illumined. You don’t have to make any effort to reach, know, or experience it. You are That. You don’t have to experience yourself because you are. The question of experiencing comes only when there is something other than you. You cannot be an object of your own experience. You don’t need to experience because you are what you are trying to be. Just be; because that is your nature.

Taṁ devadevamajamacyutamāhuragryam. Deva means god, the shining one. Devadevam is the God of gods, the illuminator of all shining ones. The sun is a deva or devatā. Other devas include the moon, fire etc. Brahman is called devadeva, the one who also illuminates all the devatās, deities. The sun and the moon shine in the light of the Consciousness; they are not self-effulgent. Ajam is birth-less, and acyutam is changeless. Agryam is the foremost, the first one, the one who is the cause the substratum; he is there even when nothing else is. 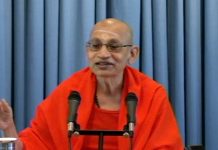 Sevā Bhāva ~ An Attitude of Service 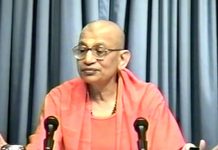 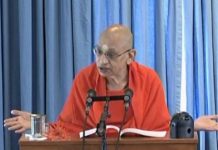 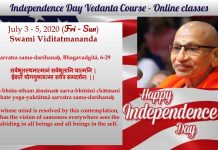