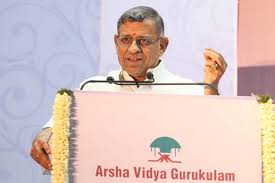 Swami Dayananda Saraswati — a master exponent of the inclusive Hindu philosophy who declared there was not ‘one God,’ but ‘only God,’ a teacher of Vedanta who created hundreds of teachers to continue the ancient Indian tradition, a great organizer who founded the Hindu Dharma Acharya Sabha as the representative body of unorganized Hindu religious traditions, a philosopher who harmonized and validated, from the Hindu perspective of theodiversity, all forms of worship from paganism to monism, an intellectual who re-articulated and established that religious conversion, regarded as the right of evangelist religions, is itself violence, and finally a patriot saint who, like Maharishi Aurobindo and Swami Vivekananda did, saw, in the ancient nation of India, the very manifestation of all that he had learnt and taught — is no more. Indeed he was the latest incarnation in the tradition of nationalist saints of India.

Endowed with unparalleled intellectual skills and unlimited knowledge base, Dayananda first made it a mission of his life to teach and did take Vedanta to a vast elite audience in India and outside, which would otherwise have been half-westernized in world view and as much Christianized culturally. He aligned Vedanta to India as a national entity and cultural phenomenon and to Indians as the chosen people entrusted with the sacred duty to live, sustain and protect it not only for them but also for the good of the world. In his exposition, Vedanta was not just a philosophy but it found expression in the culture and life of India founded on the idea of dharma — in its arts and music, literature and sculpture, society and family, and in the Indian traditional respect for elders, teachers and women and ultimately in the reverence for this nation itself as sacred and in the love of the entire creation, both animate and inanimate.

Starting off as student and disciple of the redoubtable Swami Chinmayananda, the originator of the contemporary school of exposition of Vedanta, Dayananda Saraswati rapidly grew up as an accomplished scholar and unparalleled teacher. After having worked for decades and succeeded in his mission to teach and create teachers of Vedanta, he turned his attention to some critical issues of contemporary importance which would have long-term and adverse implications for the very purpose and soul of this ancient nation. With this new turn, in the late 1990s a paradigm
shift took place in his entire course of thought and action and this led to his founding of the Dharma Rakshana Samiti in Chennai in 1999. It was in that unique event, a confluence of some highly regarded saints, spiritualists, and intellectuals, that Swami Dayananda made one of his most memorable speeches where he declared that the very concept of religious conversion itself was violence — a spiritual, mental and cultural violence. This redefined the very notion of conversion which till then had some acceptability among non-Gandhian secularists as a right of
religions — which in effect meant only the proselytizing religions — to convert others to their faith. Gandhiji’s contempt for religious conversion is too well-known for the secularists to appropriate Mahatma Gandhi to support conversion as integral secularism. This is amongst the greatest contributions of Swami Dayananda to global interreligious discourse. The redefinition of religious conversion as violence robbed the concept of conversion of benignity and exposed its malignant character. In 1999 when the then Pope visited India, Swami Dayananda constituted and led
a group of multi-religious scholars and intellectuals and welcomed but asked him to declare that he was happy to visit a nation which has respected all faiths and that he also respected all faiths. But the Pope preferred not to accept Swami Dayananda’s suggestion. However, with his unmatched intellectual prowess Swami Dayananda took the battle against conversion in world fora. He proposed self-discipline among faiths in the Millennium Summit of the United Nations in the year 2000, calling upon religions to respect each other, not to abuse one another and not
to convert the faithfuls of other religions by force or by inducement to one’s fold. There was consensus on his view but finally the proselytizing faiths did not agree and the Millennium harmony proposal therefore did not succeed. But it took just eight more years for Swami Dayananda to convince the world religious leaders of the need for transreligious self-regulation. In the human rights declaration of world religious leaders in Amsterdam on December 10, 2008, on the 60th anniversary of the UN Human Rights Declaration, all world religious leaders, including the
proselytizing faiths, accepted the Dayananda approach — namely that religions should mutually respect and accept each other, that they should not abuse or trivialize one another’s faiths or symbols, that they should recognize the right of a person to be in the religion of his birth, and that there should be no conversion by force or by inducement — and signed the historic declaration. It is the substance of the Amsterdam declaration which Prime Minister Narendra Modi adopted as the approach of his government to different faiths when he addressed the Christian religious meet in Delhi to celebrate the canonization of saints from Kerala.

In this period from 1999 to 2008, Swami Dayananda undertook some far-reaching initiatives, which included the constitution of the Hindu Dharma Acharya Sabha — one of his greatest  achievements and equally a great contribution to the Indian civilization. The Acharya Sabha has given the diverse and unorganized Hindu religions, which had long suffered disadvantage relative to the organized and proselytizing faiths, a platform to come together as Dharma religions and participate in the global discourse. Till then, any secularist masquerading as a religious person would sign on the dotted line on behalf of Hinduism in the global fora. His next big move was to bring together elders of all indigenous faiths — whether from South America or North America,  Africa or Europe — at Delhi. Swami Dayananda declared that all faiths are sacred and valid and no faith can and should be allowed to claim to be superior to other faiths. He articulated religious
diversity, which is the strongest point of Hinduism, in the most acceptable, rational and logical manner and challenged and debunked the claim that some faiths are only true faiths and others false faiths, which, he argued, is the cause for the widespread hate and violence today. The great successes of this great sannyāsī, molded in the ancient traditions of India, is not, however, as well-knownas he himself was. That also demonstrated the high point  of his personality — humility. Maharishi Aurobindo said that the greatest achievements have been least noisy. This
aptly applied to Swami Dayananda’s work and life. In his demise, the Hindu philosophy has lost its greatest exponent of recent times, Hindu religion one of its staunchest defenders, and the nation a great patriot saint.

(The author is a finance and legal professional turned investigative journalist, writer, academic and activist. Gurumurthy teaches economics and management integrated to culture at IIT and Legal Anthropology at SASTRA University, India.)